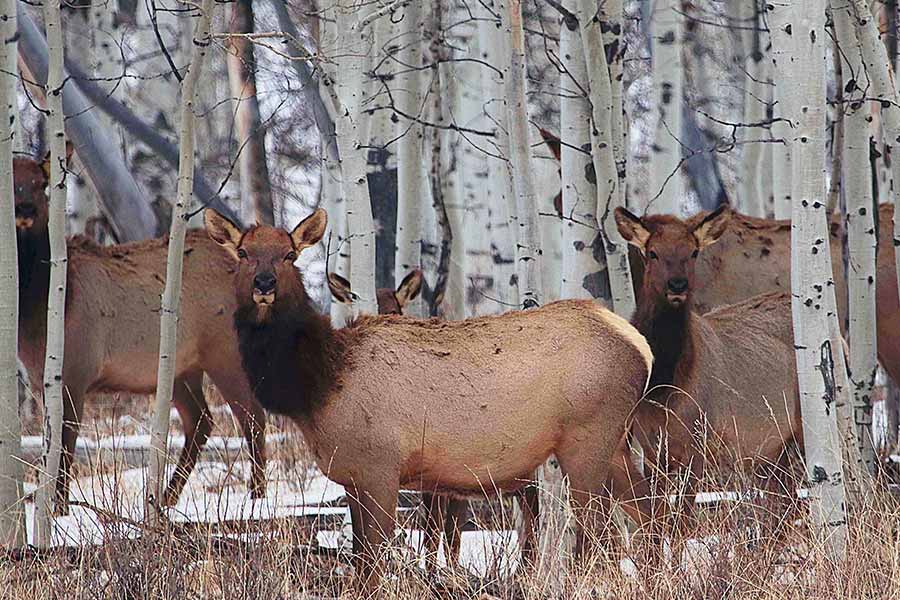 Salt Lake City — Hunting cow elk can be a thrilling experience that puts fresh, delicious meat in your freezer. But, if you shoot more than one cow elk or shoot a bull instead of a cow — or a moose instead of an elk — it can result in a poaching charge.

Every year, Utah Division of Wildlife Resources conservation officers investigate cases where someone shoots more than one cow elk, shoots the wrong sex or even the wrong species. Some hunters get so excited to see an animal that they make poor shooting decisions, firing at multiple elk or failing to properly identify their target.

Here are some tips to help you not make these same mistakes:

Cow elk often live in herds that include several cows and calves. Finding a herd of elk can get your heart pumping and your adrenaline flowing. However, you need to make sure you remain calm and know your target — don't just shoot blindly into the herd. Doing so greatly increases the chance that you hit more than one animal.

Get close for a good shot

Cow elk are big, hardy animals. To harvest one, you have to get close enough to make an effective, clean shot. Make sure you know the distance at which you can make that shot, given your shooting abilities and the firearm you are using.

After being hit by a bullet, cow elk don't always go down immediately. Unless it's hit in a vital organ, the animal will often remain standing where it is or it will run off. After taking a shot, first watch to see what the animal does. If the animal doesn't go down and you can clearly see the animal you shot at, take another shot if the opportunity is clear and ethical. If the animal runs off, don't turn your gun on another cow elk thinking you missed the first one. Go to the location the animal was when the shot was taken and start looking for a blood trail. The animal will usually die within a reasonable distance of its initial location from a well-placed shot.

Focus on one animal

Bull elk have antlers that make it easier to tell them apart. Cow elk, on the other hand, look very much alike, and they're usually found in herds that include several cows. After shooting at a cow elk, stay focused on the animal you shot at. If it doesn't go down and doesn't run off, shoot at that same cow again. Don't become confused and shoot at a different cow, thinking you're shooting at the first animal you shot at — you may not be. Stay focused.

"We have seen instances where someone took a shot and thought they missed, so they fired at another animal in the group. By the time they are done shooting, there will be five elk that are dead," DWR Capt. Chad Bettridge said. "It's really important to be educated about these animals and what you are doing before you go out into the field."

Before you shoot at a cow elk, make sure you and your target animal are within the boundaries your permit allows you to hunt. For example, if you have an antlerless elk-control permit, you can take a cow elk only in the same unit where you have an antlered big game hunting permit. Antlerless elk-control permits are not valid statewide. Be sure to verify all hunt boundaries before heading into the field. You may hunt antlerless elk only during the season dates — and with the same weapon — listed on your buck, bull or once-in-a-lifetime permit.

Don't mistake a cow moose for a cow elk. The animals are very easy to tell apart. But, every year, hunters — caught up in the excitement of seeing a large wild animal — are charged with poaching after shooting a moose that they thought was an elk. There are typically instances each year of people shooting a bull or spike elk instead of a cow elk, as well.

"If you make a mistake while hunting or fishing, we highly recommend that you contact DWR law enforcement," Bettridge said. "When someone self reports, that reduces the likelihood that your license will be suspended. We understand that people get scared or embarrassed, but it shows a lot of goodwill and says a lot about you if you will take responsibility for your actions. Learn from your mistakes and comply with the law."

If you ever suspect illegal activity involving wildlife, please report it to a DWR conservation officer using one of the following methods: