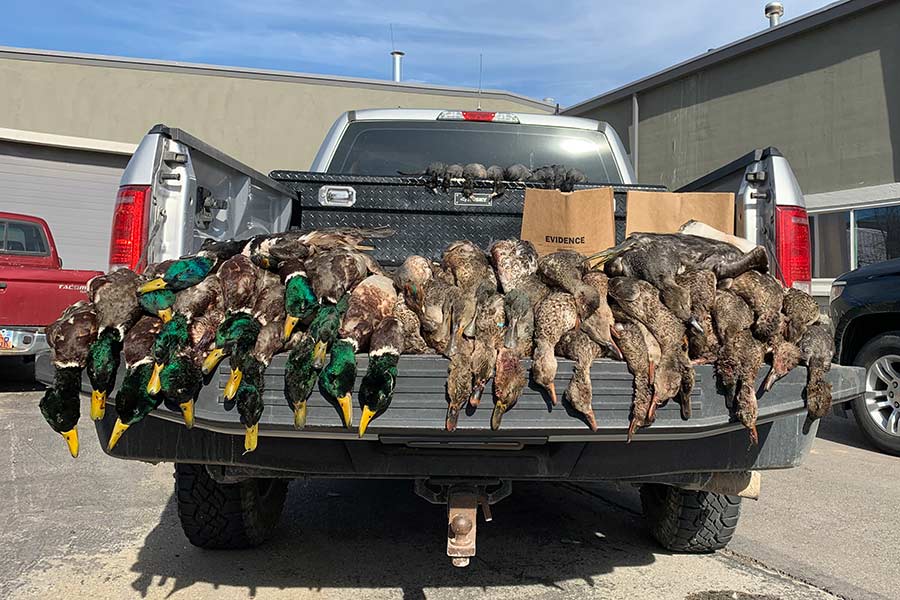 Due to clerical errors, the total monetary value of the animals illegally killed in 2019 was inaccurately stated in the initial version of this news release. This number has been updated to reflect the accurate total.

Salt Lake City — Utah Division of Wildlife Resources conservation officers are reminding the public to utilize the meat from harvested fish and wildlife after 59 ducks were recently found wasted in a dumpster.

Earlier this month, DWR officers received information about several dozen ducks that had been dumped and left to waste in a South Salt Lake City dumpster. When officers arrived to investigate, they found 59 ducks and one Western grebe in the trash and discovered that no attempt had been made to salvage any meat from the birds.

During their investigation, officers were able to determine the ducks and the grebe were harvested in Idaho and then transported to Utah, where they were disposed of. Utah DWR conservation officers are currently working with the Idaho Fish and Game to conduct an investigation into the incident. Suspects have been identified in connection with the case.

DWR officers want to remind hunters and anglers to always conduct themselves in a legal and ethical fashion. Even if wildlife is legally harvested, it is crucial to utilize the usable portions of meat and not allow them to waste — which is illegal.

"We would also like to thank those who take the time to report wildlife violations since countless cases are conducted every year because of assistance from the public," DWR Officer Josef Lehr said.

Anyone with information regarding the illegal killing of protected wildlife in Utah, or any other wildlife-related crime, is encouraged to contact the UTiP Hotline at 800-662-3337. You can also report any illegal wildlife activity on the DWR website. Rewards are available, and requests for confidentiality are respected.

Every year Utah conservation officers conduct numerous investigations into the illegal killing of wildlife. In 2019, officers confirmed that over 1,000 animals were illegally killed, with a total value of over $384,000.