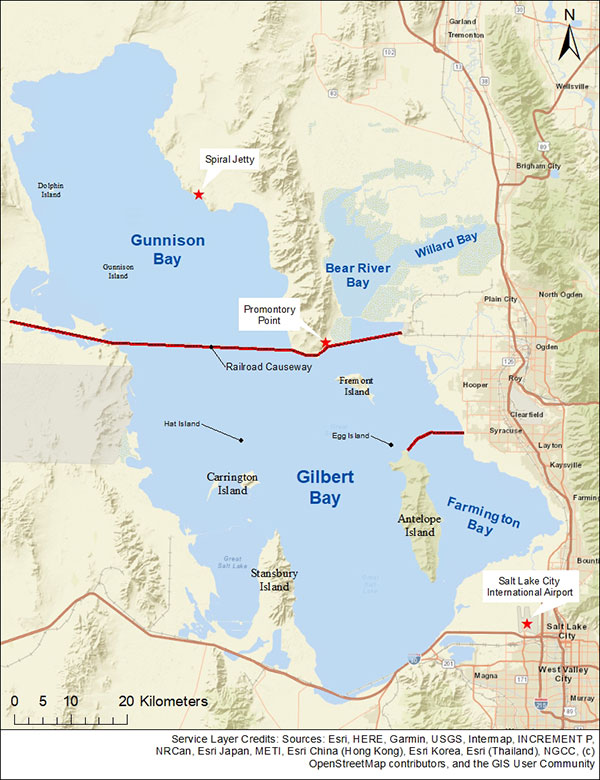 About the Great Salt Lake

The lake as we see it today

The Great Salt Lake is the largest naturally occurring lake west of the Mississippi River and largest saline (saltwater) lake in the Western Hemisphere. It has been designated by the Western Hemisphere Shorebird Reserve Network as a site of "hemispheric importance," meaning hundreds of thousands of shorebirds, such as Wilson's phalarope and American avocet, visit the lake each year. The lake is also known for its large brine shrimp population and rich deposits of salt and other minerals.

The lake is located in the north central region of Utah's panhandle and is surrounded by several vast, flat basins. It contains over 75% of the state's wetlands. Being in such a flat area means that even slight changes in water levels can change the lake's surface area considerably. Its deepest depth is approximately 33 feet.

Among the lake's most unique features are the beautifully colored water variations in the northern and southern sections, which are divided by a railroad causeway and known respectively as the North and South Arms, The color differences are due to pinkish-orange algae (Dunaliella salina) and violet-pinkish halophiles that live in the North Arm of the lake, and green algae (chlorophytes), such as Dunaliella viridis, and blue-green algae (cyanophytes) in the South. Halophiles are extreme salt-loving microorganisms that have a unique pigment, giving the water its peculiar pinkish color.

The South Arm of the lake averages about 12–15% salinity, while the North Arm averages around 26–30% and contains halophiles with a purple to pink hue. There are only two types of known bacteria that can currently live in the saturated North Arm waters — the halophiles Halobacterium and Halococcus. It is estimated that there are from one million to one hundred million bacteria in the North Arm per milliliter! 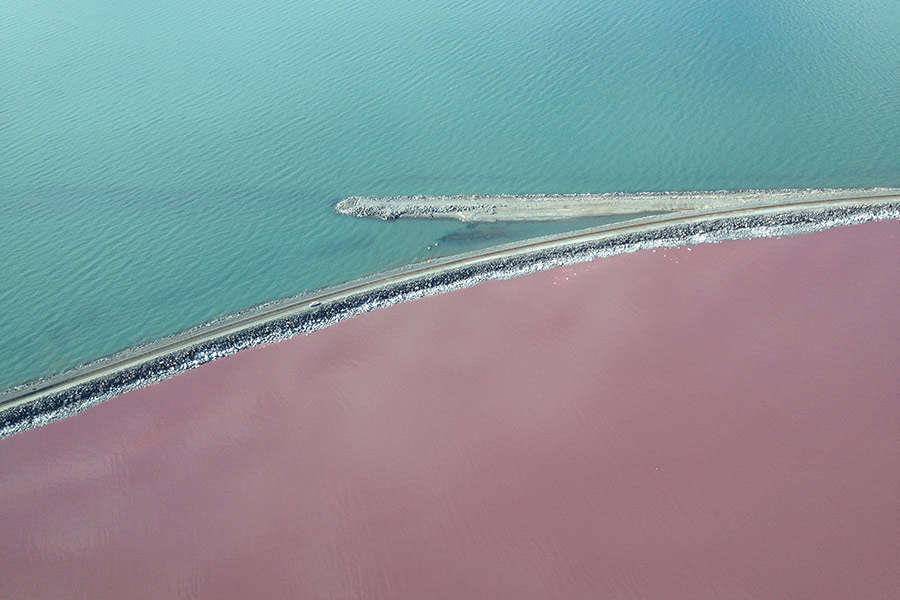 Looking southward, the saltier North Arm, with its purple-pink hue, is separated from the South Arm by a causeway.

Fresh water from the Bear, Weber, Ogden and Jordan Rivers, as well as many smaller streams and some groundwater, keep the lake at a relatively constant level while continually concentrating salt and other minerals through evaporation — although some minerals are sequestered naturally by algae and other nutrients that have heavy metal binding properties. The lake's overall water levels have been declining in recent decades.

Because of the abundant algae and halophiles, as well as the high salinity, the lake does not support fish — but it teems with brine shrimp and brine flies, which provide essential nutrition for migrating birds.