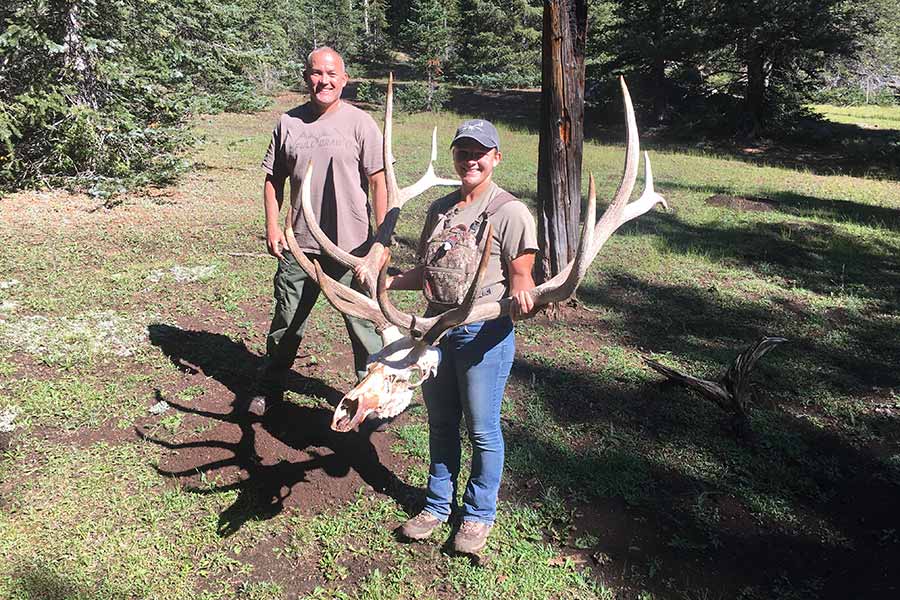 "A shiver went down my spine."

As a conservation officer, I stay pretty busy from day to day, even during a pandemic. But I've had some time in recent months to think about my work in wildlife law enforcement, and one case really stands out. Unlike many of my investigations, this one had no poachers — not even a suspect — but it holds a place as one of the wildest cases of my career.

My involvement in the case started on Aug. 11, 2018. At the time, I was still an officer in southern Utah, and my patrol district included Boulder Mountain.

On that particular day, I received a voicemail from a fellow officer who'd been contacted by a man with an incredible story. He claimed that he'd wounded a bull elk on the mountain in the fall of 2012, and his bull had just been found — six years later.

I didn't waste any time; I immediately called the hunter, Steve Smith, to get more information. And Steve was eager to share his story.

The bull of a lifetime

Back in 2012, Steve drew a limited-entry archery elk permit for the Boulder Kaiparowits hunting unit in southern Utah. He had scouted extensively, set up trail cameras and was seeing tons of big, bugling bull elk. After a couple days of hunting, a huge, beautiful bull showed up on one of Steve's trail cameras. 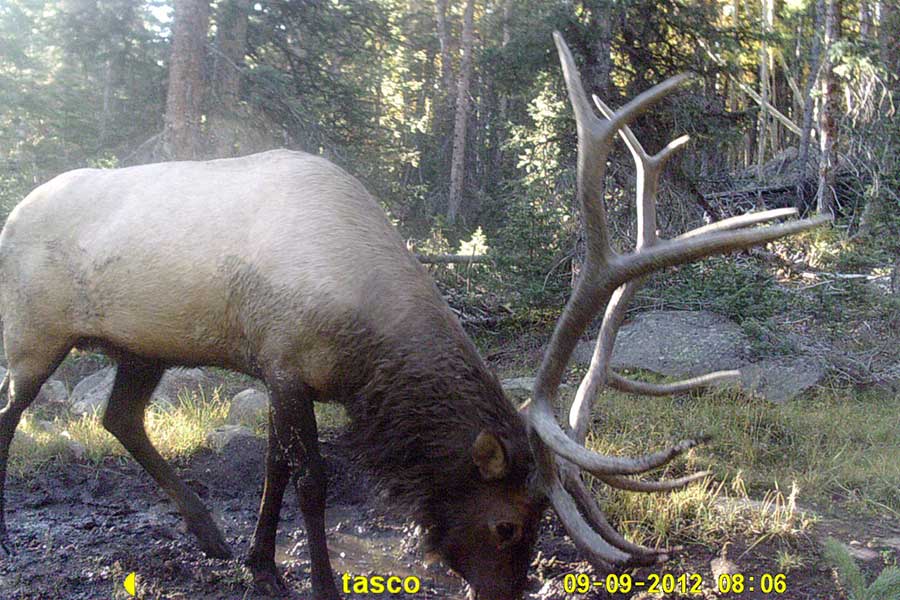 Steve was very excited to see this bull on his trail camera.

Steve was very excited to see this bull on his trail camera.

Steve knew the bull would be coming back to the area for water, so he climbed into his treestand and settled in to wait. It was only about 45 minutes before the bull appeared. Steve waited and waited to take just the right shot from about 30 yards away, but the wind shifted and the bull prepared to run.

Steve knew he was seconds away from losing the bull. He took the shot and was dismayed when his arrow clipped a wispy tree branch he hadn't noticed. The arrow still hit the bull, but it was a high shot, under the last rib. The bull bolted out of the clearing, leaving no tracks and no blood trail.

Steve began an exhaustive search, and he was sickened at the thought of wounding and losing the bull. Another hunter — named Justin Christensen — was camped nearby with his father, and they both joined Steve in looking for the elk. Working together, they searched the mountain, but they didn't have any luck.

In the days and weeks that followed, Steve was persistent:

For years, Steve was haunted by the memory of that hunt. He told me about the stress and worry, "Had he survived? Did someone see him on the winter range? Did he wander around for weeks, getting sicker and sicker and finally succumbing to a terrible infection? I just wanted closure, if anything. In the years that followed, I thought about this bull on a regular basis, always wondering, feeling guilty, and blaming nobody but myself."

A twist of fate

Eventually, Steve chalked it up as a lost cause. He'd come so close to the bull of a lifetime but figured it would never be found.

Until someone found it — six years later.

In a wild twist of fate, the person who found the bull in August 2018 was Jaquel Brooks. Jaquel was the daughter of Justin Christensen, the neighboring hunter who'd helped Steve search for his bull.

Her dad's story about the massive lost bull was unforgettable, so when Jaquel and her husband, Bret, came across the bleached bones and broken arrow during a hike, she was pretty sure it was Steve's missing animal. She left the carcass alone and called her dad. And when he saw the animal, he knew it was Steve's bull. 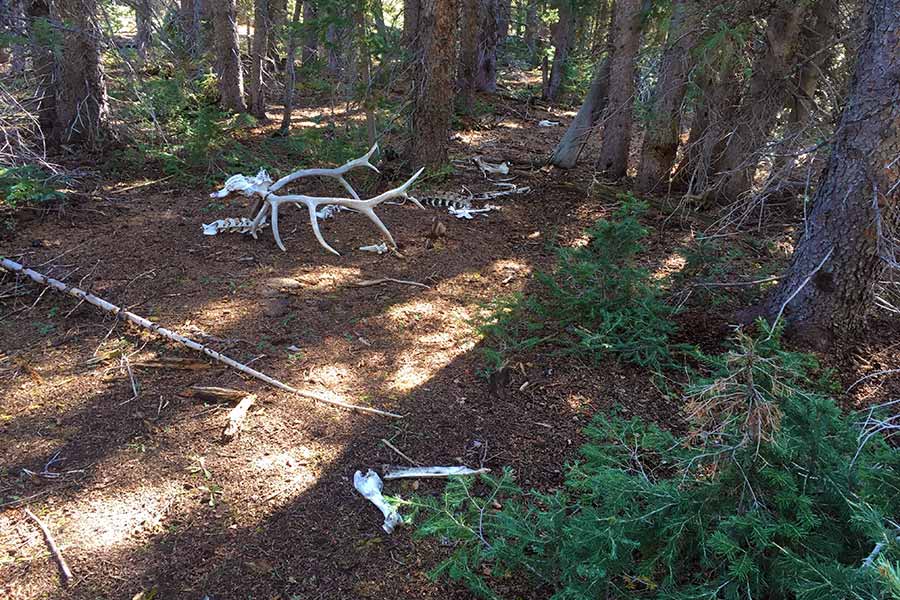 Jaquel and Bret Brooks found the remains of the bull in a small clearing in the Griffin Top area of Boulder Mountain.

Jaquel and Bret Brooks found the remains of the bull in a small clearing in the Griffin Top area of Boulder Mountain.

In August 2018, Steve's phone rang. He described his thoughts at seeing Justin Christensen's name on the caller ID, "...a shiver went down my spine. I knew he wasn't calling to just catch up and shoot the breeze." Justin informed Steve that his long-lost bull had been found. And that's where I came into the story.

During my initial phone call with Steve on August 11, 2018, the whole tale sounded too incredible to be true. Steve's home was many hours away, in northern Utah, but he asked if I could meet up with Jaquel and Justin at the site where they'd found the bull.

The next morning, we headed to the Griffin Top area of Boulder Mountain for the investigation. Despite the incredibly cool story, I knew the scene had to be investigated thoroughly. The evidence would have to be rock solid, or I couldn't give the bull's skull and antlers to Steve.

When we pushed through the thick timber into a small clearing, the sun-bleached bones were immediately noticeable. Fortunately, neither Justin nor Jaquel had touched or moved anything.

(Important side note: If you find a big game animal with antlers attached to the skull, it's illegal to pick it up or move it. Sometimes, those animals have been poached, and we need to be able to conduct an investigation. Please contact us with photos and an exact location. If it's clear that the animal died of natural causes, we may allow you to keep your find.) 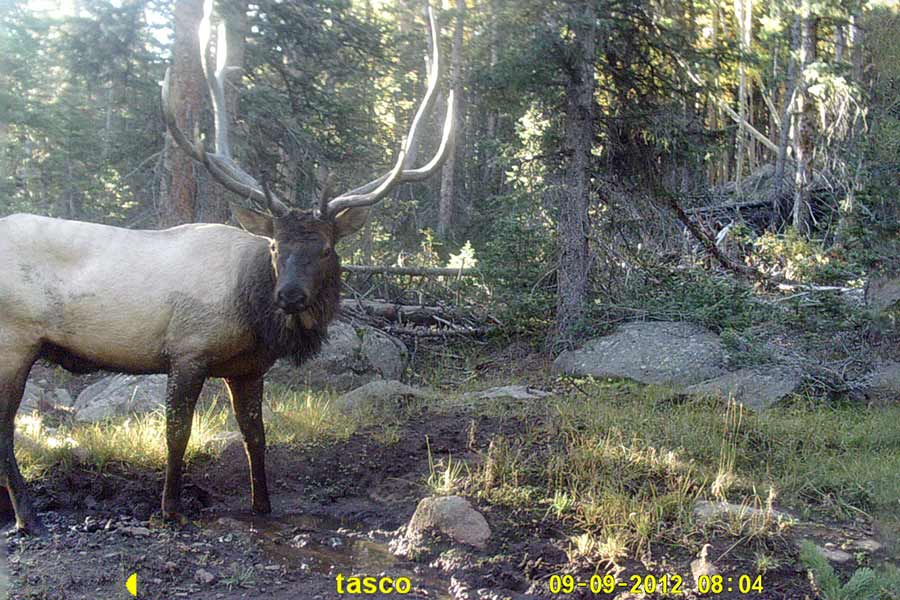 The bull elk's skull and antlers were in surprisingly good condition after six years and were an exact match for the animal in the trail camera photos.

I started taking photos of the scene and looking at where the bones were scattered.

Although it had been scavenged soon after its death (likely by coyotes), the elk was still in remarkably good shape! That definitely made a difference in the identification process. And it was one of many extraordinary circumstances that aligned that day:

Before I could give the bull to Steve, I had to be 100% certain that it was the bull he'd wounded and lost, that he had a permit for the area, and that he hadn't harvested another animal. After I reviewed all the evidence — both the photographs and the remains at the scene — I was confident that I could return the bull to Steve. At that point, it was okay to pick up the heavy antlered skull, and Jaquel was eager to pack it down the mountain. She and Justin took some fun photos to send to Steve and then handed off the antlers to me so I could get them up to northern Utah.

Justin Christensen and his daughter, Jaquel Brooks, played an enormous role in helping reunite Steve and his bull.

Justin Christensen and his daughter, Jaquel Brooks, played an enormous role in helping reunite Steve and his bull.

Not long afterward, I made the trek to Davis County and met up with Steve in a Farmington parking lot. It was immensely satisfying to reunite him with the elk that had vanished into the timber so many years earlier.

He was excited and truly grateful to Justin, Jaquel and Bret for their honesty and help. They could have kept the magnificent bull for themselves but took the ethical high road instead. The odds of Steve being reunited with his wounded bull after six years were microscopically slim, but it was amazing to see all the evidence match up perfectly to his story and be able to help him. 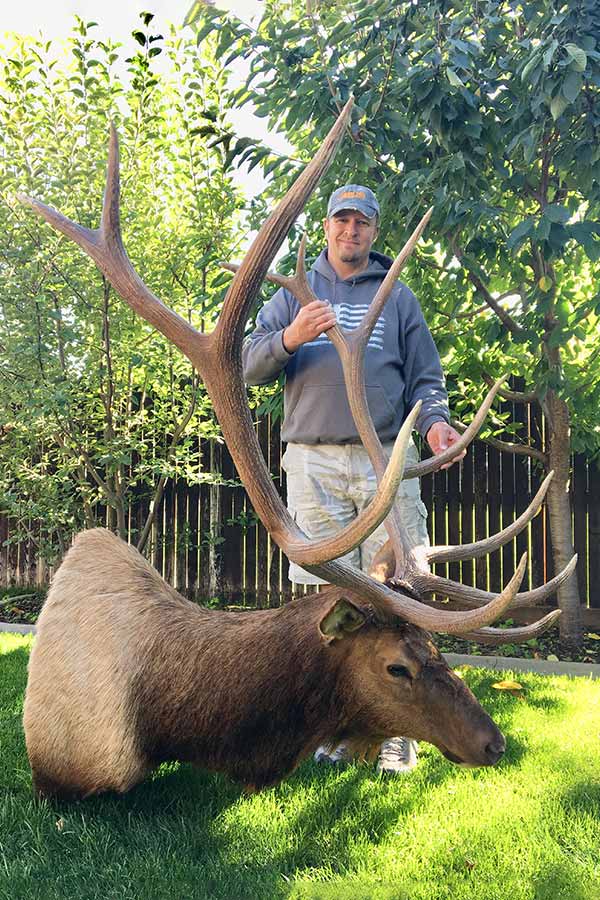 With the arrival of his elk from the taxidermist, Steve's hunt story finally had a happy ending.

With the arrival of his elk from the taxidermist, Steve's hunt story finally had a happy ending.

Last fall, Steve finally got his elk back from the taxidermist and sent over a few photos so I could see how it turned out. He purchased the cape of another animal and opted for a shoulder mount — it looked awesome!

This case captured some of the things I love most about being a conservation officer: helping hunters who have integrity, finding solid evidence in a case and seeing someone overcome incredible odds. So, don't give up hope, folks. Life can still surprise you. And sometimes, it even puts a smile on your face. 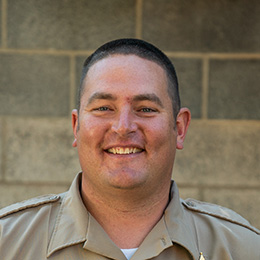