Pelicans are pretty easy to spot. They are large, weigh 10–20 pounds and have a wingspan of 8–10 feet. They are white with a long neck and a massive, orange bill. You can often see them by the hundreds either swimming, fishing or soaring. They can soar for what seems like forever, on long, broad white and black wings. Seeing one is easy, and usually there isn't just one. Catching one, however, is hard. 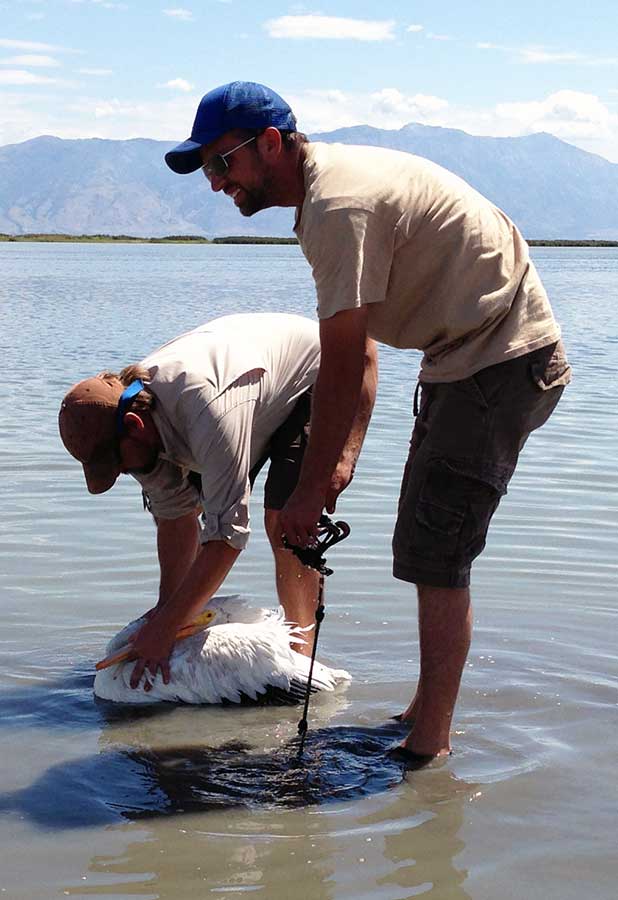 Catching a pelican isn't as easy as it seems.

Catching a pelican isn't as easy as it seems.

I've had the privilege of being involved in the monitoring and management of American White Pelicans in Utah. Pelicans have had some tough times, from disturbance of nesting colonies, pesticide use and population controls.

But through conservation efforts, pelicans have started to make a comeback. They are still not as abundant as they used to be, but the overall outlook is bright. That is a good thing for these birds and for people like me who love to see them.

However, it can also be a not-so-good thing if you are a fish in a sensitive fishery, or an airplane that just had a negative, mid-air interaction with a pelican.

So I — along with a whole team of biologists — am working on answering the questions to better help us continue conserving the pelican and avoid the issues they can cause.

A portion of this kind of work involves banding and tagging young pelicans at the nesting colony on Gunnison Island, which you can read in a previous post. Another part of the work (the part that I've been working on) involves catching adult pelicans and attaching GPS transmitters to track daily and seasonal movement patterns.

It may sound like an easy task. I had no idea how hard it would be. We've tried just about everything to make the process as painless as possible.

Using airboats and motorboats to rush up on them didn't work. They can hear us coming and take off before we can get close. 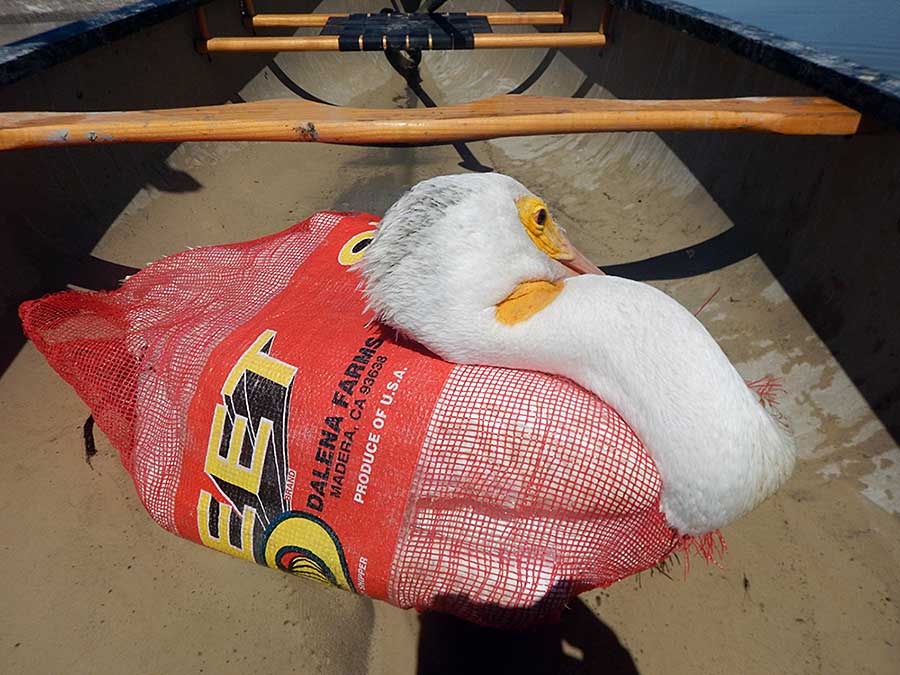 Once we trap a pelican, we slide it into a holding bag so that we can keep it calm and contained while we place the transmitter.

Once we trap a pelican, we slide it into a holding bag so that we can keep it calm and contained while we place the transmitter.

We've set up net cannons and bow-net traps where pelicans like to hang out, but as soon as they see something out of the ordinary, they stay out of range.

Back East, people have even tried using helicopters and the down draft from the rotors to keep them from flying away, but these wary pelicans won't let a helicopter get the best of them. Sure we've been able to bait in a few, we've tried decoys, we've tried driving them with kayaks and we've caught a few.

But the most efficient method we've tried is setting soft-catch traps and then gently driving pelicans towards them. A soft-catch trap is a modified version of the classic jaw-style foot-hold trap. The springs have been switched out for lighter ones to reduce the snap. The jaws have been padded with rubber to reduce the bite, and the chain that holds it in place is replaced by a bungee cord to prevent any dislocations in the leg.

At first, I wasn't sure we could catch a bird without hurting it. But after seeing the bird's feet without injury, and even snapping my own hand in the trap, I can assure you, they don't hurt.

The day starts under the cover of darkness, setting out the traps. Then there's a lot of sitting, watching and waiting. As the pelicans spend the morning fishing and look for a nice mudflat to rest on, we nudge them by paddling around in kayaks — not enough to scare them, just enough to push them toward the traps.

When there's a scuffle and a bunch of flapping, we know we've caught one. We rush to retrieve it from the trap, slide it into a holding bag, reset the trap and head back to attach the transmitter. 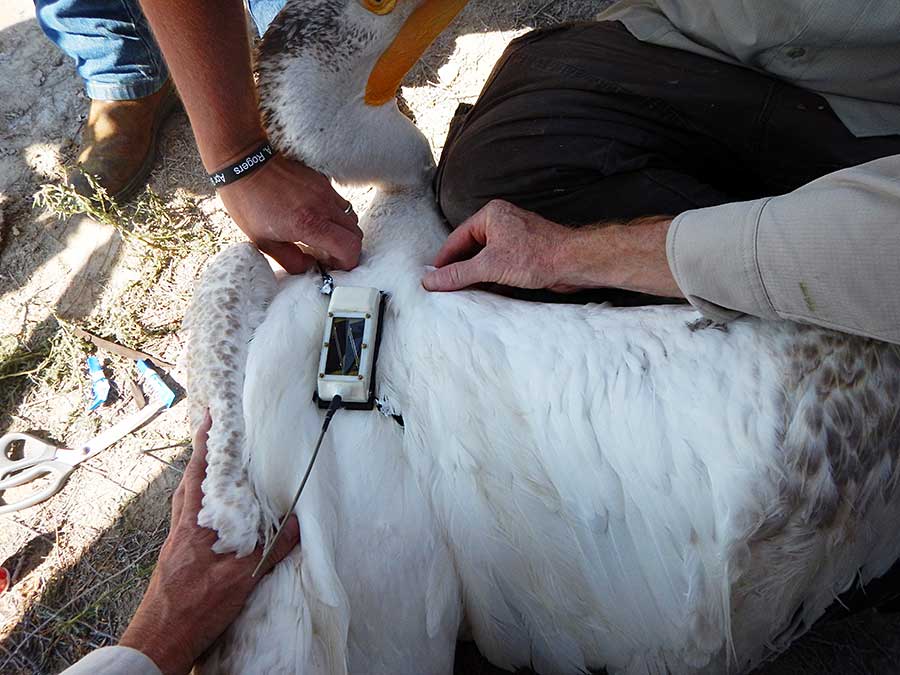 Fitting a pelican with its new transmitter backpack.

Fitting a pelican with its new transmitter backpack.

This task is made more difficult by the fact that a pelican can inflate itself like a balloon. I tie and retie the knots several times to get the attachment tight, but not too tight. Once satisfied, I use superglue and an accelerant to hold the knots fast. One last final check, and it's time to release the bird.

The transmitters we're attaching are solar-powered GPS units that store waypoints and then transmit them back through the satellite system, so I can track these birds without having to recapture them.

We have built a web-based map that automatically updates with all the latest waypoints. One of the birds we caught was apparently a father and made a few flights to and from the Gunnison Island nesting colony every other day before heading south to Mexico. 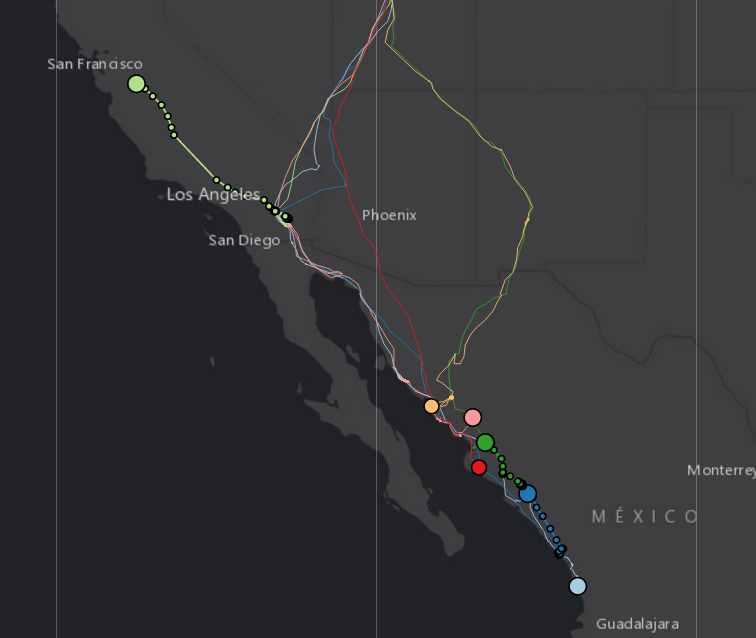 Follow the pelicans' movements via the new web map!

Last August we put transmitters on seven pelicans. One is on the Salton Sea in southern California; the rest are in Mexico on the Sea of Cortez. So far two have ventured as far south as Mazatlan and a little past.

We are only about one tenth of the way through deploying these transmitters, and we will trap and track up to 71 birds over the next couple years. This next summer we will be busy catching pelicans.

Our goal is to place transmitters on the adult pelicans that use Gunnison Island to hatch and raise their young. We'll also place a few transmitters on pelicans at Strawberry Reservoir in order to learn where those birds come from.

One of the most exciting things about this whole project is checking the map each week (or every three days when it updates) and seeing where the birds have traveled. Fall migration was really fun to watch, especially how quickly (almost non-stop) the birds traveled. I can't wait for the northward treks this spring!

If you've seen a pelican with a wing tag — or you have questions about pelicans in Utah — please contact our avian biologist John Neill at 801-231-2019 or This email address is being protected from spambots. You need JavaScript enabled to view it..

Adam is the Conservation Wildlife Biologist in the Northern Region. He enjoys working with bats and pelicans but focuses on the multitude of non-game birds and mammals found north of Salt Lake City.