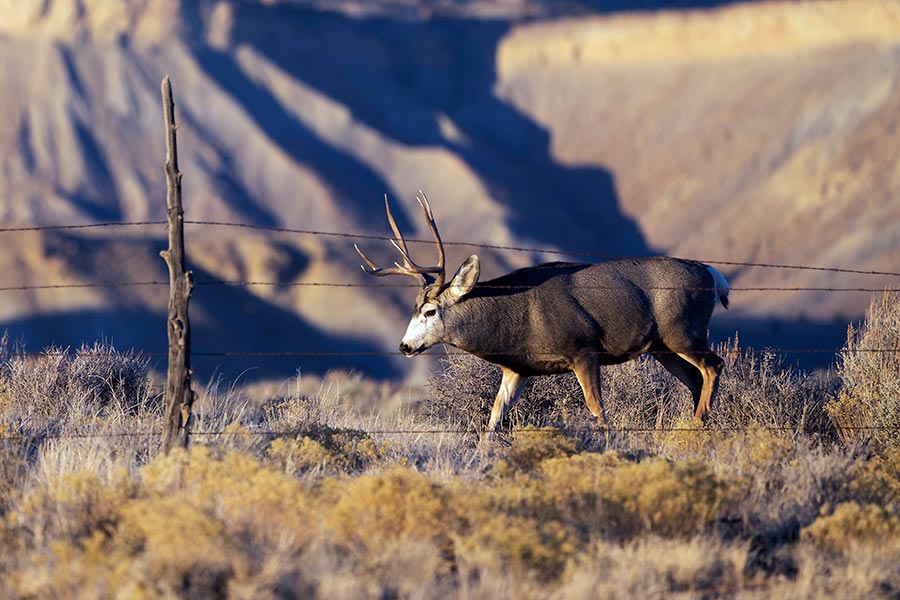 Salt Lake City — The deer you shot on public land ran onto private property and then died. You shot and killed what you thought was a spike elk only to discover that it was actually a cow elk. You just finished filleting the six rainbow trout you caught before realizing that the catch limit at the reservoir was actually four. Before you find yourself in any of these scenarios, here's what Utah Division of Wildlife Resources conservation officers would like you to know.

Do your research before going into the field

If you want to hunt on private property, you must get written permission from the landowner in advance.

If you want to hunt on private property, you must get written permission from the landowner in advance.

Just like you'd never fly a plane without getting some training and doing a lot of preparation, you shouldn't go fishing or hunting without making sure you know the laws. A common mistake that DWR conservation officers see is people killing wildlife or fishing without a valid permit, often due to negligence and not carefully checking their hunting permit.

You have to take hunter education or participate in Utah's Trial Hunting Program to obtain a hunting license in Utah. Then, make sure to read and become familiar with the laws in the guidebook for the species you are hunting. You also need to make sure you carefully check your permit so you know which season, species and unit you are allowed to hunt.

"The best way to stay out of trouble is to review those regulations and also check your permit carefully before you go out in the field," DWR Capt. Wyatt Bubak said. "It's shocking how many people go hunting without even opening their envelope to see what permit they drew. They often don't check their permit until after they have harvested an animal, and then finally discover that they hunted in the wrong unit or season, or sometimes for the wrong species."

The same goes for fishing. If you’re planning a fishing trip, make sure you have a current fishing license and take the time to read the fishing guidebook so that you know the requirements for the waterbody you're visiting. You should understand which species must be released, what the limit is for each species and if bait is allowed.

"There are hunting unit boundaries and fish limits for a reason," Bubak said. "These things help us manage various wildlife species according to specific plans and to maintain healthy populations for each area or waterbody. If we don't enforce the boundary or limits, our management plans don't work as well."

There are a lot of resources available on the DWR website, including maps to the hunting boundaries and popular fishing spots, and guidebooks that detail Utah's hunting and fishing laws.

"If people have additional questions or concerns about the law, they can also call one of our DWR offices and talk to a law enforcement officer," Bubak said.

How to avoid other common mistakes

Another common mistake that DWR conservation officers encounter is when a hunter mistakenly shoots the wrong animal. One great way to prevent that is to be absolutely sure of your target before taking the shot.

"Never take that shot if you aren't absolutely sure and confident of your target and what is beyond your target, including if there are roads or buildings in the area," Bubak said. "That will help prevent you from shooting a doe deer when you have a permit for a buck deer."

You should also keep in mind that an animal doesn't always drop right after it is hit.

"We have seen instances where someone took a shot and thought they missed, so they fired at another animal in the group. By the time they are done shooting, there will be five elk that are dead," Bubak said. "It's so important to be educated about these animals and what you are doing before you go out into the field."

The Utah Department of Agriculture and Food has reported livestock around the state being illegally killed and left to waste in fields. If these animals are killed during a hunting season, DWR conservation officers often assist in the investigation. If you suspect livestock being illegally killed, you can call the same anti-poaching hotline used to report illegally killed wildlife: 1-800-662-3337 or submit a report on the DWR website.

Another common scenario is when a hunter gets into a dispute with a private landowner about a deer shot on public property that crosses the hunting boundary line and dies on the landowner's private property.

"If you choose to hunt so close to the boundary that the animal may jump the fence or cross that boundary line, then you need to prepare in advance for that possibility," Bubak said. "You can't just cross onto that private property and retrieve the deer. You need to immediately contact the landowner and request permission to recover the animal or contact DWR law enforcement. Otherwise, you are trespassing, which is illegal and can lead to conflicts with the landowner."

Another common issue that conservation officers see is hunters not properly tagging their animals after they have harvested them. To tag a big game animal, you must completely detach the tag from your big game permit and completely remove the three notches that indicate the date the animal was taken and the sex of the animal. Then, attach the tag to the animal so that the tag remains securely fastened and visible. You may not remove more than one notch indicating the date or sex, or tag more than one animal, using the same tag.

During your hunt, if you use an ATV or other off-highway vehicle, you should remember that the same DUI laws that apply to driving a regular vehicle also apply to an ATV.

"Driving an ATV while under the influence of either alcohol or drugs has the same stiff penalties as a regular motor vehicle," Chris Haller, the off-highway vehicle program coordinator for the Division of Parks and Recreation, said. "These penalties can include jail time, fines, the loss of a driver's license and being arrested. Be responsible, as this is an action that's very preventable."

When and how hunting/fishing licenses are suspended

There are a variety of ways that people break the law. Some make a mistake. Others are opportunistic and will take advantage of an opportunity while hunting or fishing, even when they know it's against the law. And some head out into the field fully intending to break the law ahead of time. In most of these instances, the person will be criminally prosecuted and will pay a fine. But for a hunting or fishing license to also be suspended, the person has to intentionally, knowingly or recklessly violate the law.

"If you make a mistake while hunting or fishing, we highly recommend that you contact DWR law enforcement," Bubak said. "When someone self reports, that reduces the likelihood that your license will be suspended. We understand that people get scared or embarrassed, but it shows a lot of goodwill and says a lot about you if you will take responsibility for your actions. Learn from your mistakes and comply with the law."

The lengths of various suspensions are established by the Utah Legislature and are based on the designated class of crime. If the crime is determined to be a class C misdemeanor, the suspension is one year. For a class B, it's three years. For a class A misdemeanor, it's five years, and for a felony, it's a seven-year suspension. However, those suspension lengths can be doubled for two reasons: if your license was already suspended at the time of the crime or if the crime involves a trophy animal.

"The entire purpose of wildlife law enforcement is to encourage people to comply with the laws," Wyatt said. "Those laws are made to benefit wildlife and the public. I honestly wish that everyone would just comply with the law so that we didn't have to do suspensions. That is our goal. But unfortunately, people do break the law, and we believe that a license suspension is the best deterrent we have for people who intentionally commit wildlife crimes."

If an investigation reveals that a crime meets the criteria for license suspension, the person is notified and is offered a hearing. These hearings are held at the Utah Department of Natural Resources building in Salt Lake City on the first Tuesday of each month and are open to the public. A hearing officer, appointed by the Utah Division of Wildlife Resources director, receives the details of the case and determines whether the hunting or fishing license will be suspended. If a person disagrees with the suspension, they may appeal it to the Utah Wildlife Board within 30 days of the hearing officer's order being issued.

"Along with determining if someone knowingly, intentionally or recklessly violated the law, we also take into account the circumstances and their past history before we recommend a license suspension," Bubak said. "If the law just changed in the past 30 days, we take that into account."

Utah is a member state of the Interstate Wildlife Violator Compact. License suspensions in Utah are recognized in all the other states in the U.S., except for Hawaii.

Be an ethical and responsible hunter and angler

Along with following the laws and maintaining safety while hunting and fishing, it's also important to practice responsible recreation: only drive on designated roads if you are in a vehicle, and don't ride off trail if you are using ATVs. Make sure to always review road and trail maps before traveling to an area and be familiar with the areas you plan to ride in.

"There is an influx of damage due to off-trail riding during the hunting seasons," Haller said. "When people ride off trail, they damage essential wildlife habitat. This habitat is important for the success of game survival, and off-trail riding could negatively impact popular hunting areas. This can be avoided simply by staying on designated ATV trails, which will sustain future hunting opportunities."

Anyone who camps or hikes in Utah's outdoors, whether hunting or not, should always leave a clean campsite, thoroughly extinguish any fires and remove all trash or waste from the area, including shell casings. And, if there are other hunters or campers in the area, remember to show them the same courtesy and respect you'd hope to receive.