JUST LIKE HUMANS, mule deer and other wildlife species are subject to disease. And, if you've ever stopped at a Utah Division of Wildlife Resources (DWR) check station during the fall hunt, you've seen firsthand that the DWR is closely monitoring wildlife populations for any presence of disease. 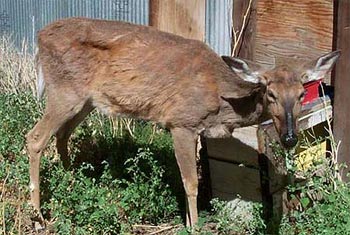 Disease management is a critical component of the DWR's Mule Deer Management Plan and our efforts to maintain healthy mule deer populations. That's why the DWR has set up a disease management program to plan and perform surveillance activities that are designed to prevent, monitor and manage wildlife disease.

The goal of the DWR disease management program is to prevent the spread of disease through early detection, and to provide the public with factual and timely information about diseases.

What is the DWR doing to monitor, prevent and fight mule deer diseases?

The Division has a wildlife disease program in place to:

The DWR has also put restrictions in rule that are designed to prevent the spread of wildlife diseases. For instance, hunters are prohibited from importing elk, mule deer or white-tailed deer carcasses from areas with known Chronic Wasting Disease (CWD) infections. Additional restrictions will be added whenever necessary and prudent.

How extensive are the disease-monitoring efforts?

Over the last ten years, the DWR has spent more than $3 million dollars on the surveillance and management of CWD and other diseases that affect mule deer.

The DWR has implemented an aggressive surveillance plan to target deer in specific management units. DWR biologists staff check stations statewide during the fall hunts. Biologists, with the support and assistance of hunters and sportsman, collect samples from hunter-harvested animals from target sample units. Biologists also collect samples from roadkill and symptomatic animals throughout the state. Samples are then sent to the lab for testing.

Since the end of 2002, the DWR has sampled every Management Unit with adequate deer populations to detect the presence of CWD with 95 percent confidence limits. 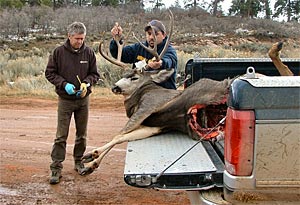 In Utah, several diseases could be potentially detrimental to deer herds.

In the past, the DWR has documented small outbreaks of epizootic hemorrhagic disease in some Utah mule deer populations. Other diseases — like pneumonia, salmonella and conjunctivitis — have also occurred sporadically. These outbreaks have been isolated events in most cases and populations have recovered quickly from any losses.

CWD was first detected in Utah in 2002. In the fourteen years since the DWR began CWD surveillance, 54 mule deer and one elk have tested positive for the disease. CWD has been found in three specific areas of central, northeastern and southeastern Utah.

What is chronic wasting disease, and why is it significant?

CWD is a relatively rare disease that's found only in wild and captive deer, elk and moose in North America. CWD attacks the nervous system and brain of infected animals. The disease causes the animals to become emaciated, display abnormal behavior, lose their bodily function and eventually die.

CWD is significant because it provides an example of the DWR's response to wildlife diseases. The DWR has been continuously monitoring Utah for CWD since 1998, even though the first CWD-positive deer wasn't found until 2002.

How is chronic wasting disease diagnosed?

To learn whether a deer has the disease, biologists collect the lymph nodes from symptomatic, vehicle-killed, and hunter-harvested deer in all sample units. Laboratory personnel then examine the samples under a microscope using special techniques to identify CWD.

What can I do to help?

The DWR will test any deer, elk or moose exhibiting clinical symptoms of CWD. If you find a sick or emaciated deer, elk or moose, please report the animal — along with GPS coordinates, if possible — to a DWR regional office, biologist or conservation officer.

Likewise, if you hunt in a target area that requires a sample from a harvested animal, please make sure you provide biologists with the necessary sample as quickly as possible.

Additionally, if you are hunting outside of a target surveillance area, you can choose to have a sample tested from any harvested deer, elk or moose at your expense.